I followed opportunity West in early 1970's from Missouri and settled in TUCSON AZ working for the afternoon newspaper the TUCSON CITIZEN which covered ARIZONA and Mexico during the Golden Years of Newspapers, the Citizen covered Southern Arizona for 138 years. I worked there for thirty-six and thirty of those years I served as photo editor. This position allowed me to work with some of the finest photographers in the business and it was always exciting. During those years, I became interested in SCUBA and the PreHistory of the SouthWest and making pictures of the American South West. South West Landscape photography allowed me new material for my camera, as an TUCSON ARIZONA photographer much of my photography comes from the vast Sonoran Desert, but I try to develop images from all over the South West, including mainland Mexico, most specificly the BAJA and the incredible SEA of CORTEZ.

Today, I am becoming newly acquainted with some of my old haunts and know I will find others. Like the Colorado River Delta where I have worked extensively over the years and recently added portions of the Colorado River dividing Arizona and California, or the narrow ARIZONA STRIP. In recent months, I visited burn sites from Arizona's destructive forest fires this summer. Water Issues are important as the U.S. continues to suffer droughts and shortages and Arizona is the canary in the coal mine. I will continue to visit the River System for inspiration and intend to explore the copper mining communities of the SouthWest.

Chester, my No.1 Sheltie, while loyal and faithful, isn't worth a hoot, with gunfire or cannonfire or godforbid thunderstorms, otherwise, he faithfully hangs by my side. He particularly hates the dreaded cholla in his paw. Look over SouthWestPhotoBank.Com, we sell prints both archival, canvas, and metal, we offer personal down loads, and quotes for editorial use look over our website

SOUTHWESTPHOTOBANK.COM besure to visit my Blog,

SOUTHWESTPHOTOJOURNAL.COM   THANKS! drop by again...

This site adds and updates daily...

"WHILE A PICTURE MAY BE WORTH A 1000 WORDS, THAT SMILE IS PRICELESS !"

Facebook comment to seeing Gabby Giffords smile six months after the shooting. The release of her photos brought more than 3,000 hits to SOUTHWESTPHOTOBANK.COM in 48 hours, yielding more than 10,500 page views from 47 different countries. 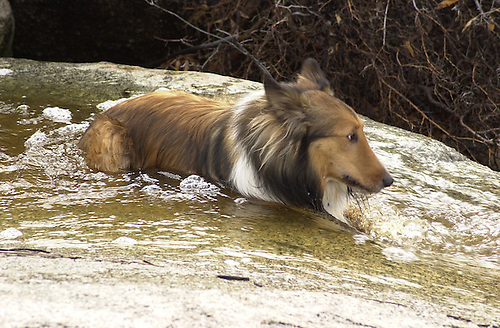 CHESTER COOLS OFF IN A MONSOON FLOW