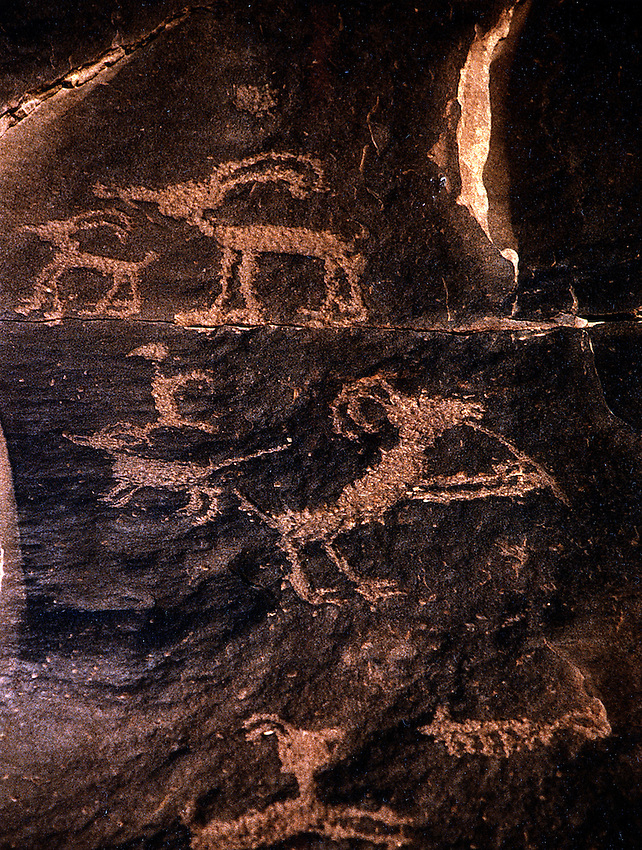 This flute-playing Mountain Goat carved in rock is found at SAND ISLAND IN BLUFF UTAH in the midst of the NAVAJO Nation but is a remnant of the ANASAZI prehistoric culture. This isolated view represents perhaps 18 inches by maybe 30 inches sliced from a rock art panel on a 150' cliff beside the San Juan River. Most of that 150 foot cliff is rock art, this is simply a paragraph.It appeared to me as very cool having a Mountain Goat playing the flute, like Kokopelli, so I pulled this in with a 300mm lens and thought no more about it until one day when I visited Edgar Perry, a White Mountain Apache Medicine Man and described the panel to him from memory.
Is there a crack between the two groups of sheep? he asked. Yes, I said. "That line represent the real world (topside) and the supernatural world (beneath)," he said. Topside you see two sheep walking on all fours beneath the crack you see two sheep -- one standing on two legs and playing a flute and the other on all fours with a bird (raven) appearing from its head the Navajos call this, skinwalkers or shape-shifting. The Medicine Man points out the White Sheep becoming a black Raven characterizes the battle between good and bad, right and wrong. Imagine if that much meaning can be taken from a fraction of the entire panel, imagine what else, we could learn everywhere.
P.K. Weis 5 Jan 2008 7709x10212 / 68.4MB
SW ART